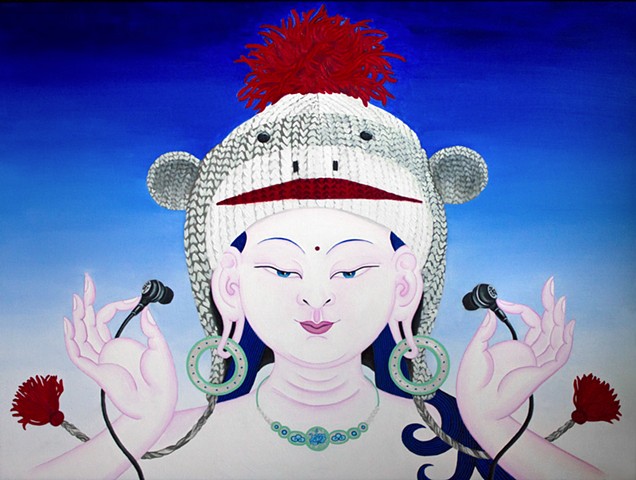 Elizabeth Comport grew up in a small town in Connecticut among the forests of New England. Filled with a deep sense of her purpose in life she began training as an artist at the age of seven. In 1999 her creativity and inability to conform led to her town making her the focus of a modern day witch-hunt. This devastating yet pivotal transformative experience led her to the study and practice of Buddhism, Postcolonial Reconstructionist Paganism, and Witchcraft. The experience of otherness, both asserted and imposed, continues to be profoundly influential. In 2006 she lived in Dharamshala, India where she volunteered within the Tibetan refugee community. A vision of Lord Shiva in the Himalayas expanded her perception of divinity and the universe. Upon returning to the USA she attended Maine College of Art as a painting major and was awarded the Jennifer Gross Award, best in show for the 2009 BFA Show. Soon after, a vow of silence sparked the profound experience of Kundalini Awakening and Elizabeth became focused on pursuing traditional Buddhist and Indian painting techniques. This led her back to the Himalayas where she received training in Tibetan thangka painting from a Master. Elizabeth returned to the USA to complete her degree at Naropa University where she was able to further pursue the study of Buddhism and thangka painting.

Elizabeth lives with her partner of twelve years, Gregory. Both painters and intellectuals, they share a studio and a concerning number of books. As opposite sides to the same coin they complement each other in a way that others find inexplicable.